Posted on February 1, 2015 by stevepiscitelli

What we do in these situations
defines our characters and our destiny.

Courage.  How do you define it? How do you exhibit it in your daily life? Probably the best way I ever heard it defined did not see it as blind fearlessness but, rather, as movement toward a goal in spite of the fear.  Many times we see acts of courage on TV or written about in books.  Such situations, usually, show extraordinary moments in time in which someone acted in an extraordinary manner.

Courage. Most of us will never experience being on patrol in insurgent territory on foreign soil. Nor will we hold on to a dear friend as he dies in an Afghanistan firefight.  Lt. Colonel Michael Waltz did.  His story is told in Valor and his new book Warrior Diplomat. (Note: Lt. Colonel Waltz was a high school student of mine who has gone on to make a mark on our world as a Green Beret and advisor to the Vice President of the United States.  All net proceeds from his current book go to veterans’ charities.) 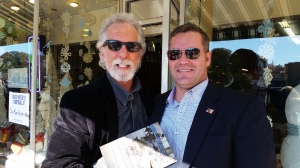 Courage. Can you imagine being 14 or 15 years of age and encountering a hostile mob just because you wanted an equal education?  The Little Rock Nine did.

Courage. Samuel Adams, one of the fearless leaders for the American War for Independence said,

“If ye love wealth better than liberty, the tranquility of servitude better than the animating contest of freedom, go home from us in peace. We ask not your counsels or arms. Crouch down and lick the hands which feed you. May your chains set lightly upon you, and may posterity forget that ye were our countrymen.”

And he went on to fight against immense odds for a cause he was willing to sacrifice his life for.

While most of will never be in situations like Waltz, the Little Rock Nine or Adams, we still have situations every day that allow us to step up and demonstrate courage. To ignore the fear and move forward.  Consider the following examples:

We have so many opportunities each day.  We engage in little acts of courage that we may not even be aware of when we do them. What we do in these situations defines our characters and our destiny.

Thank you for taking the time to read my blog post. Please share it (and any of the archived posts on this site) with friends and colleagues. You also can follow me on Twitter, LinkedIn, and Facebook. If you get a chance, visit my Facebook page and join in–or start–a conversation (www.facebook.com/stevepiscitelli).  If you have suggestions for future posts, leave a comment.

Information on my book, Choices for College Success (3rd ed.), can be found at Pearson Education.