Posted on February 13, 2011 by stevepiscitelli

This week’s blog posting will have a bit more personal indulgence than past posts.  Valentine’s Day is not just another holiday on the calendar for me. It is my wedding anniversary. And February 14, 2011 is particularly special as it marks our 35th year.  Thirty five years!  Amazing to think of that number. It seems like it belongs to someone else—someone much, much, much older! Where did the time go?  My wife and I agree that it has gone by in a blink.

My wife Laurie (Hoppi) and I met on a blind date (Wednesday, January 21, 1975; we went to a Jacksonville University Dolphin basketball game at the old Jacksonville Coliseum) during my senior year in college.  Three months after our introduction, I graduated and started a career.  One month after that, Laurie moved to Jacksonville.  Nine months after that we were married. The year was 1976. The nation was celebrating its bicentennial; Pittsburg beat Dallas in Super Bowl X; a new figure on the national political scene won the Democratic Caucus in Iowa—and eventually the presidency; the Toronto Blue Jays baseball team came into existence; Apple Computer Company was created by Steve Jobs; the Ramones released their first album; my New York Yankees were swept by the Cincinnati Reds in the World Series.

But obviously for this 22-year old couple, the big news was our wedding—and the beginning of a life adventure.

A few of my remembrances of that day 35 years ago:

Someone recently asked me about the “secret” to 35 years of marriage.  I never like those types of questions. The answers usually sound so freakin’ pompous and self-serving.  For us, there is no secret; no formula. We have had our difficulties like all others. Heck, truth be told, we didn’t know what we were getting into.  We didn’t have a checklist of what we wanted or were looking for.  But, if you held me down to provide a secret, I’d say it is simply giving each other space.  We have encouraged each other, supported each other, and challenged each other along these 35 years.  We have NEVER “kept score.” You know, the kind of relationship you might hear something like, “Well, I did such and such last week…so you have to do such and such this week.”

But mostly the reason for our success and longevity is that I “married up”!  Yep, I hit the jackpot.  I know, I know. Cliché!  But if there is such a thing, I married an old soul.  Laurie lets so many things roll off her back—while I fuss and fume.  One card I got her this year pretty much summed it up: “Of course I love you. Who else would put up with all my crap?”  She is pretty amazing.

In “Remember When,” Alan Jackson sings:

Remember when thirty seemed so old
Now looking back, it’s just a stepping stone
To where we are to where we’ve been
Said we’d do it all again…Remember when….

One of the songs on my latest CD was my first stab at a love song. While it is not Alan Jackson quality, “Coffee and Candles” does have a turn on words that I am proud of:

When young turns to old
And fast becomes slow
No matter the pace
Together we’ll go….. 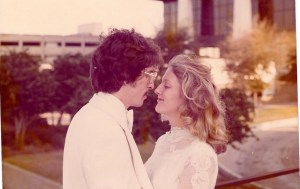 Facilitator-Author-Teacher
View all posts by stevepiscitelli →
This entry was posted in Relationship. Bookmark the permalink.